Surveys by the United Nations and others repeatedly show that Dutch children are among the happiest in the world. So what do children who move here like best about the Dutch way of doing things? Here’s some of the things kids we know have picked up on.

Pancakes
Top of nearly everyone’s list.  Dutch pannekoeken, or pancakes, preferably with syrup and icing sugar, possibly banana and chocolate sauce, bacon and apple… you name it, you can have it on a pancake. 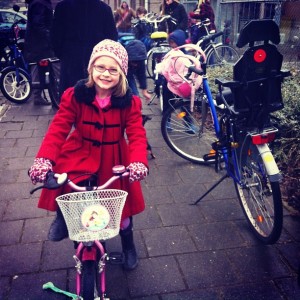 Who needs a helmet?

From about the age of four, Dutch kids can be seen riding their own bicycles, without training wheels, around the neighbourhood. Were they born this way?  Non-Dutch kids are soon addicted to the freedom a bike allows and – thanks to the cycle paths – as a parent you feel relaxed that your offspring are safe cycling to school or to friends’ houses. Not that you will manage to force them into a bike helmet of course. And as soon as they turn 15, they will start muttering about wanting a scooter.

Hagelslag and other things on bread
Chocolate sprinkles on your sandwiches – not difficult to see why kids like this, or why becoming a dentist is something you should encourage your children to aim for.  Hagelslag, chocolate paste, speculaas cookies, and muisjes – all sweet and delicious on soft, white bread! As an expat mother, your house may be boycotted by your children’s friends unless you have hagelslag in the cupboard.

Schools
No uniforms and almost no homework!  If your kids have gone to school in almost any other country other than the Netherlands, attending a Dutch school, once they have tackled the language, is going to be a breeze.  The no uniform policy is particularly loved by teenage girls, who grab the opportunity to dress up and perfect their makeup before cycling off to chemistry class.

Your kids will love it

The Dutch love them – one of the most famous rollercoaster makers in the world is Dutch company. Be prepared to hand over a large heap of cash and spent a lot of time waiting in queues but Walibi, Efteling, Linnaeshof, Duinrell, Drievelt, Slagharen and Hellendoorn among others are waiting for you.

No holding her back

Like with bikes, Dutch kids have been forced onto skates as soon as they can walk, so your expat kids will probably have some catching up to do. But if there is a big freeze, there will be no holding them back. Outdoor skating also means great pics to post on Facebook for admiring friends and relations. See also five things you need to know about skating outdoors.

Sport
Forget school sports – in the Netherlands its all about club competitions and six and seven year old fanatical football players and hockey starts will find themselves whisked off to matches all over the place. Hockey clubs in particular appeal to teenage girls because they get to dress up in short skirts and have attitude at the same time. And don’t forget the parties. Lots of parties.

Birthdays
The egalitarian Dutch custom of ensuring no-one gets left out means your children will soon come to associate every birthday with a little gift, whether or not it is their own. As a parent, you will be driven insane by having to come up with something clever and imaginative to eat. See also five rules for dealing with Dutch birthdays.

Vice
So this is the one they don’t talk about – but expat teens are secretly thrilled at the extra layer of cool living in the sex and drugs-riddled Netherlands gives them among their friends in other places. But parents don’t need to worry. Dutch kids have one of the lowest teen pregnancy rates in the world and are much less likely to abuse drugs than their peers in other countries. The UN says so.