The good burgers of Amsterdam ruled what is now New York  from 1609 to 1664. Not very long in terms of years, but the Dutch influence can still be very much felt – not least of all in the Constitution and the Declaration of Independence. Here are 12 places in New York that can trace their names back to the original Dutch settlers. 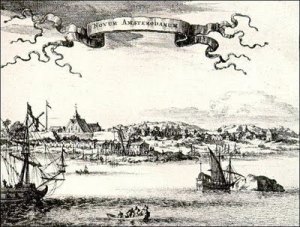 It all began here

Bowery – from bouwerij, the old Dutch word for a farm (now boederij)

Brooklyn – Breukelen, near Utrecht, still a charming small town on the water

Bronx – Settler Jonas Bronck built a farm on this land in 1639.

Greenwich village – is said to take its name from greenwyck, or ‘pine area’.

Harlem – Sensible American spelling, loose the second a from Haarlem

Rikers Island – the prison island is thought to be named after settler Abraham Rycken, who moved to Long Island in 1638 and whose descendents owned the island until 1884.

Wall Street – the name is generally thought to have come from a defensive wall built by Dutch settlers on the southern tip of Manhattan Island.

Yonkers – many be named after jonkheer (lord) Adriaen Van der Donck, who had an estate in the area

For more, check out this interactive map.