Cycling is good for the soul. It keeps you fit, people don’t sneeze all over you in the bus or tram, you get to frighten tourists out of their skins with your bike bell and it’s cheap. But there are a few things you need to know before you handle your bike like a Dutchie.

1. No gears
Gears are for sissies and old people who like to go for long bike rides at the weekend with another couple. The sun bounces off the shiny wheels of their pristine bikes which live in the shed or some other sheltered place. An expensive sounding whirring noise, such as your 7th hand bike never made, denotes their coming. Get out of the way because these oldies pack a mean pace. And they are chatting as they pedal! You have to give it to them.

Which one of these is mine?

2. Beware of bike rack rage
Not only are your handlebars adorned with more chains than Houdini, you also have to have his talents as a contortionist to get your bicycle in and out of the bicycle rack. These are usually full with the exception of one small space.

You wrestle your bicycle into it, lock all 26 chains and on emerging from the maze of handlebars, pedals and other sticking out bits, you not only find you have lost your scarf, the gold bracelet your grandmother gave you on her deathbed and a clump of hair but you have ripped your new coat as well. Grrr. 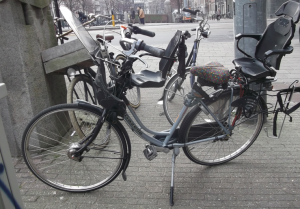 A bicycle made for three

This accounts for the ambivalence the Dutch display towards their bikes. They love it but won’t look after it. Why would they if it could be gone in the morning?  There is stands, in the rain, its once shiny bell pockmarked with rusty dots, its back rack sagging. Bikes can’t win

4. Shine a led light
Amsterdam at night: thousands of little led lights twinkle and blink on the coats/rucksacks/bobble hats/bikes of happy cyclists. They are happy because they have been liberated from the old fashioned bike light with its fragile electrical thread (see bike rack rage) and the umpteenth fine.

Every household must have led lights in their dozens and trying to find a matching pair can be a problem: usually there’s two working reds, one dead white and a feebly blinking white or vice versa. The reason for this is that cyclists who are well over the limit, or otherwise distracted forget to take both leds off leaving one to blink disconsolately and uselessly at the pair of gloves that has also been left behind.

Forget the tight-fit lyra shorts with built-in water bottle, unless you are  pro. The weather has forced the Dutch to develop some extremely attractive clothing to combine with its bikes. You will be forced to join in.

Sold at any decent Dutch shop (Blokker, Hema), the pants and jacket combination provides excellent refuge from the rain. The pants are especially useful for keeping the tops of your legs dry as you cycle. The downside is that there’s no classy way to get in or out of the outfit and once you’re out, where do you put it?

The Poncho is designed to fit over your bike handlebars so you can avoid the aforementioned leg wetness. Beware of the pool of water that collects in your lap. Non-natives may find the poncho difficult to ride in and, as it’s the size of a small tarp, you’ll again face an issue of what to do with it when you take it off.

If you pay close attention, you’ll notice that most Dutch bikes have mudguards. A feature bikes in other countries often lack, the Dutch know the importance of fenders. As the ground is constantly wet here, fenders are crucial for not spraying yourself and your fellow riders with muddy rainwater.

The Dutch members of the Netherlands by Numbers team don’t even consider this worthy of mention but we foreigners have learned the hard way that classic Dutch bikes have back-pedal brakes. If you are lucky you might have one hand brake – if it works. But as you swerve to avoid tourists who are trying to kill you by cycling en mass down the middle of the road remember to jam down your heels as hard as you can – and then fall over the handlebars.

See also: Five ways the Dutch will try to kill you using a bike