There is one sure way to really annoy the average Dutch person and that is to criticise the persona of Zwarte Piet. Not that we want to annoy anyone, you understand.

But we do think it pertinent to aware of the facts if you find yourself having the traditional Zwarte Piet discussion.  Here are 10 essential pieces of information to help you argue your case, which ever side you are on.

1. St Nicholas’ death on December 6 was commemorated in the Netherlands for centuries. Way back in 1427 there are records of people setting their shoes at the St Nicholas church in Utrecht in the hope of getting a gift.  The celebration was banned during the Reformation but the Dutch being the Dutch,  continued to do it anyway. Sinterklaas or Pakjesavond is now celebrated on the eve of his death – or name day – December 5.

Not a Zwarte Piet here

The Feast of St Nicholas (1665-68) by Jan Steen shows how it was done. The boy is crying because he got a switch in his shoe, the girl looks smug because she got a doll. Yep, in the good old days, Sinterklaas punished you were bad and gave you a gift if you were good. Way back then Sinterklaas – who worked alone in the Netherlands, without a servant or page – was not the benevolent chap he is today.

2. Sinterklaas was first given a black page in a book called Sinterklaas and his Servant published in 1850 by school teacher Jan Schenkman. Schenkman also established that Sinterklaas, somewhat bizarrely for a Turkish bishop, lived in Spain and came to the Netherlands by steam ship.

3. Some people think Schenkman may have been influenced by Walter Scott’s Ivanhoe, a very popular book at the time in which a Knight Templar returns from Palestine with two black Saracen servants. Others say he could have been influenced by characters in  Heinrich Hoffmann‘s  Struwwelpeter. Art historian Michiel Kruijt points to the fashion for having black child slaves in the 17th century.

4.  Parallels have also been drawn between Sinterklaas and Zwarte Piet and Odin with his two black ravens Hugginn and Muninn who listened at chimneys to find out what had been going on.

A compatriot of Zwarte Piet? Surely not

Others see Zwarte Piet in a European tradition of dodgy companions for St Nicholas, such as Ruprecht in Germany, the terrible Krampus in the Alpine region or even the devil… Zwarte Piet a black devil, surely not?

5.  The servant was given the name Pieter in the 1891 Schenkman book Het Feest van Sinterklaas.

6. The first formal Sinterklaas intocht or arrival procession took place in Amsterdam in 1934 or 1935 (the sources are as fuzzy about the dates as the pictures). 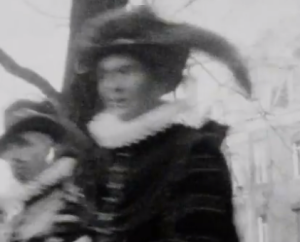 These people are not white Zwarte Piets

Sinterklaas was accompanied by a lot of white heralds in outfits very similar to today’s Zwarte Piet. And,  according to Sinterklaas expert Marie-Jose Wouters, the procession also included six Surinamese sailors whose boat was in the harbour at the time. They are, alas, not on the film. But it could just be that the very first Zwarte Piets in the procession were Surinamese.

7. The Piet character went on to become an established part of the performance with his curly afro hair, blackface make-up, thick red lips and gold earrings. 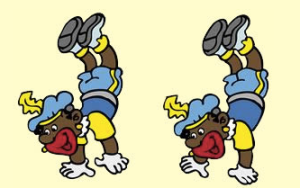 Since the 1970s, the tradition has changed and more Piets have been added to the line-up – so you have the Head Piet and the Rhyme Piet, the Cool Piet (in Adidas stripes) and the whatever else you like Piet. Piet is no longer a total buffoon talking in a Surinamese accent and he no longer has a switch to hit naughty children or stuffs them in a sack to take them back to Spain. He is the children’s friend and gives them sweets and pepernoten. Piets have also become cleverer as the good Sint has become more forgetful.

8. Zwarte Piet is not black because he is an African slave or a servant or the devil or a raven, but because he has been up and down so many chimneys delivering presents. His clothes may be clean and sparkling but that’s by the by. After all, there is that charming little song which children sing at this time of year: ‘Don’t worry child, I’m your friend and even though I am as black as soot, I mean well’. 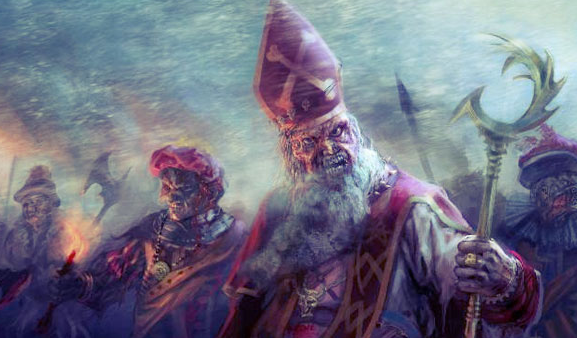 Not suitable for small children: Sint and Piet are the stars of a horror film by Dick Maas

9. A survey by Amsterdam city council last year found 39% of people of Surinamese origin don’t like the idea of Zwarte Piet being at their children’s school, nor do 28% of Ghanians, 24% of Antilleans and 17% of English speakers. However the survey found no people of Moroccan origin thought Zwarte Piet was an issue. A survey in October 2013 for television programme EditieNL found 96% of the Dutch think the Zwarte Piet character should stay.

10.  Zwartepieten is also a card game similar to Black Maria in Britain. The Jack of Spades is the Zwarte Piet and if you are left with him at the end of the game, you are the loser. A this point, we will refrain from making nasty jokes about spades.

The saying ‘Iemand de zwartepiet toespelen‘  – giving someone the Zwarte Piet – means passing the buck – or blame.  Another positive stereotype there then.