Okay, we are not being totally honest here… there are other places we like to visit as well… but here are 10 things which think are really worth doing in Amsterdam – outside the usual tourist trail.

The Bible Museum
We think the Bible museum is quite interesting in its own right but in reality it comes here only to gawp at the 17th and 18th century splendour of its surroundings and to have tea in its splendid garden. The museum takes up two of the four homes built by seriously rich merchant Jacob Cromhout (1608-1669) on Herengracht. 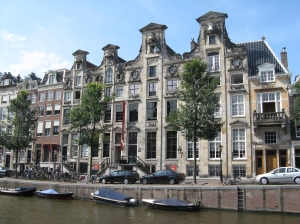 A crochety neighbour refused to yield to the power of money and stubbornly held on to a piece of land needed by Cromhout to build his town palace. Architect Philips Vingboons then decided to make two of the houses smaller. The neighbour who probably realised he wouldn’t have much of a view left then changed his mind but by that time it was too late. Cromhout went to live in number 366 (with 368 the site of the museum) and prudently rented out the rest, undoubtedly for quite a lot of money. There’s a beautiful 18th century staircase, painted ceilings, family portraits and lots of antique baubles and bits.  Website

The Oranjesluizen (sluices)
The Oranjesluizen are a system of locks built in the IJ in the early 19th century as part of the construction of the Noordzee Canal. This immense undertaking was meant to keep ships coming into Amsterdam harbour from getting stuck in the mud. The locks play a vital role in the water management of the city to this day. Engineer Johannis de Rijke who was responsible for the project is largely forgotten here but thankful Japanese, for whom de Rijke built dams for Osaka harbour, gave him a statue and apparently travel to Amsterdam every year to perform a Buddhist ceremony on his grave. What all his is leading up to is this: take a walk from Zeeburg to the picturesque Durgerdammerdijk and Schellingwouderdijk via de Oranjesluizen. It is very nice.

Tasjesmuseum Hendrikje
The museum of bags and purses, as it calls itself in English would force any anti–bag, multi-pocket coat wearer to his or her knees. From 15th century gothic to 21st century loopy this museum has the biggest and most beautiful collection of bags in the world.

It is a strong visitor who will walk out of the museum shop without having purchased at least a mini bag. Personal NbN favourites are the 1935 clutch representing the ‘Normandie’ and a forties bag by Anne Marie of France in the shape of an ice bucket with a bottle of champagne sticking out. The museum is housed in a beautiful former mayor’s house on Herengracht. Also nice for a high tea or lunch if you’re feeling flush. Website

Museum Het Schip
If you want to find out about the architectural style that managed in a short time (1910 – 1930) to become pretty influential in the Netherlands the place to go to is Museum Het Schip in Amsterdam. The building itself is a prime example of Amsterdamse School: built in brick with great attention to detail, from fancy ornamental brickwork on the façades and ‘laddered’ windows to street numbers and doors in the same style. The care and attention lavished on the building is all the more remarkable because it was built as a public housing complex and it is not surprising is was quickly dubbed ‘a palace for workers’. Architect Michel de Klerk’s brief included a post office and this is the architect’s only surviving interior. Website

Stadsarchief
The De Bazel building is undoubtedly one of the grandest buildings in Amsterdam, both on the outside and the – completely original – inside. It was built between 1919 and 1926 by Karel de Bazel for the Nederlandsche Handelsmaatschappij or Dutch trading company and was home to ABN Amro until it made way for the city archives (Stadsarchief) in 2007.

This is where ABN Amro used to keep your money

A guided tour will take you along the impressive staircases and stained glass windows to some awe-inspiring offices in which it is easy to imagine a young clerk quaking before a stern faced cigar smoking board member. In the vault downstairs there is a permanent exhibition ranging from the archive’s collection – including official documents dating back hundreds of years to pictures of Johan Cruijff and concert posters. There is also a nice cafe.  Website

Foam
Photography museum Foam is literally a stone’s throw from the De Bazel building so if you happen to be too late for a guided tour you can always pop in here. Its interior is starkly modern and we always feel completely inadequate sartorially speaking as the museum seems to somehow demand Ann Demeulemeester or at least head-to-foot black. But that’s completely beside the point as the museum has hosted some brilliant exhibitions over the years and no doubt will continue to do so.  And they have good quiche for lunch. Website

Brouwerij ’t IJ
Brouwerij ’t IJ micro brewery in the now increasingly trendy Oostelijke binnenstad ( go to the Stadsarchief to see what this neighbourhood looked like not too long ago) serves a couple of very nice beers among which Zatte and Natte, the difference between which you will find it increasingly difficult to remember as the time passes, and a sensational ossenworst. Only open from 2am to 8pm. Check the website for guided tours. Website

Hortus Botanicus (botanical gardens)
The Hortus as most people call it is another excuse to have tea and cakes in an urban oasis. Not that you’d need much of a one: there are lots of interesting things going on in the Hortus which by the by is one of the oldest in the country.

Take, for example, the wondrous Victoria Amazonica  which only blooms at night when it produces up to 30 flowers which are white on the first night and pink on the second.  The Hortus website gives out Victoria-will-bloom alerts when this is about to happen. You can also wander through the palm houses and check out the desert temperature when it’s cold outside. It also has a shop which is good for nice if pricey Sinterklaas and Christmas pressies. website

Tuschinski
The Tuschinski film theatre (1921) is a folly of truly magnificent proportions. Owner Abraham Tuschinski incorporated everything he liked and then some in a building that combines Jugendstil, Amsterdamse School and Art Deco. When the theatre was restored in 2002 a number of treasures were rediscovered, including some 18 Art Deco paintings and the Peacock ceiling in the main auditorium. The light fittings in particular are very beautiful. You will need at least two guided tours to take it all in. The main cinema has boxes at the back where you can relax in wide seats with a glass of bubbly and nachos during a blockbuster.  Website

Eye Film Institute
The Eye Film Institute has the most comfortable seats of any Amsterdam cinema. Forget the spectacular architecture, the fact it takes a jolly boat ride to get there (If you’re not an Amsterdam Noord dweller of course) and the wonderful view, it all counts as nothing compared to the softness of the seats. Don’t snore that’s all. Website