The last official government list of endangered Dutch species was published way back in 2009. It’s not pleasant reading and if you’re a mushroom lover (the kind that gets excited about spotting them, we mean) you will immediately be plunged into a deep depression. It’s not just the species themselves, it’s their wonderful names. Somber Staalsteeltje (literaly: Sombre Steel stem) or Tandsporig Hazepootje, (Toothspore hare’s foot) and many other weird and wonderful names will never be heard again.

Here are 10 species that are on the verge of an obituary. Unfortunately the full list is much longer.

Eliyomus quercinus (alias the Eikelmuis, or garden dormouse) is a sleepy creature. This rodent spends around seven months of the year asleep and that is one of the reasons it is so vulnerable. It has also fallen prey to the Dutch disease of ‘opruimeritus’ which involves clearing away anything that is deemed unsightly such as messy sheds or hay lofts which is where the dormouse likes to rest its fluffy head.

Another cuddly candidate for the chop is the hamster (Cricetus cricetus and we don’t mean the serial hamster in your child’s cage). It is also called Korenwolf, or rye wolf, for its voracious appetite for rye. The animal is still occasionally spotted in Limburg – usually on a piece of land earmarked for development. A captive breeding programme is underway to try to increase their numbers.

You would think that Rattus rattus, or the black rat  would be able to look after himself but no, he too is on the danger list. The black rat has been with us for centuries and he’s not leaving the world stage any time soon. In the Netherlands, however, he’s having a thin time of it, if we can believe the ministry’s Red list. Rattus rattus’ problems include fierce competition from the brown rat and the use of grain silos instead of easily accessible farm buildings. The rat has also been widely killed off by man. 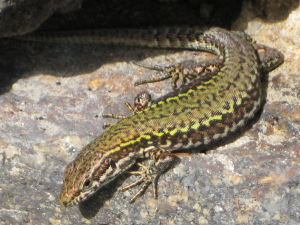 Of the reptiles it’s almost last orders for Podacis muralis (the Muurhagedis or Wall lizard). It is still around on the bulwarks of the city of Maastricht, in the province of Limburg, were the council are trying to respect the animal’s habitat whilst at the same time giving way to ‘architectural opruimeritis’ i.e. making old buildings look as if they were built yesterday. 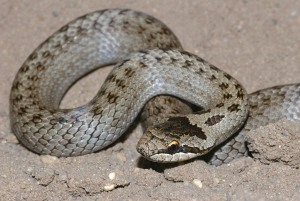 The Coronella austriaca (the Gladde slang or Smooth snake) is not in any immediate danger of slithering off into the distance but it’s far from safe. This non-venomous snake doesn’t like to be disturbed. Neither does it like high temperatures which make it highly suited to the Netherlands but it needs a bit of space as well: trainee soldiers running around and messing up their habitat, lots of building activity, sand extraction and above all traffic are all reasons for its decline. Its preferred food, other reptiles and rodents, are not in great supply, another reason the species is not doing too well. 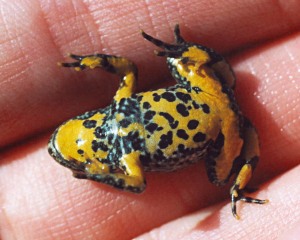 Of the amphibians we need to keep an eye on the jolly Bombina variegata (the Geelbuikvuurpad or Yellow-bellied toad) he’s not much to look at from above and doesn’t flaunt his assets (unlike some species we could mention) which include his splendid yellow tummy. The Yellow-bellied toad is becoming very rare. His only habitat at present is in Limburg where he favours shallow water to generally splash about and procreate.

Hyla arborea (the Boomkikker or European tree frog) is a splendid looking animal, bright green with a dark racing stripe on the side, truly the Porsche among frogs. His particular problems are acidity of his natural habitat, i.e. trees, water pollution through pesticides and manure and too many fish (which gobble up the little frogs). Some people catch tree frogs and sell them.

Butterflies are on the red list too. Melitaea athalia (the Bosparelmoervlinder or heath fritillary) is currently threatened with extinction. And so is Erynnis tages (the Bruin dikkopje or Dingy skipper (!)). Again Limburg is home to the two remaining populations of the Dingy Skipper. Extensive mowing, a lack of open vegetation to lay its eggs and a lack of other populations nearby to provide partners is threatening this butterfly’s chances.

There is, of course, great excitement in the Netherlands at the thought of the wolf returning to the wilds of Limburg or the east. And in case you thought these endangered species are all a bit too small, don’t forget the Netherlands has its very own Big Five.

Thanks to all the wonderful folk of wikimedia commons for the photos.