The Dutch murder rate is pretty low in global terms and although Amsterdam has been the centre of a spate of gangland killings in recent months, the Netherlands is a safe place to be. That is not say we have not had our share of nasty murders. Here’s 10 of the headline makers.

Elsje Christians kills her landlady and is hung for the murder
Elsje Christians came to Amsterdam from Denmark in 1664 to look for a job as a maid and rented a room in a hostel. When two weeks had gone by Elsje still hadn’t found a job and her landlady wanted some money, or failing that, Elsje’s belongings. A shouting match ensued. When the woman started hitting her with a broom the girl snapped, grabbed the first thing to hand – which unfortunately for the landlady happened to be an axe – and killed her tormentor. She jumped into the Damrak – which was a canal in those days – and was promptly fished out to stand trial. She was strangled to death and her body hung from a pole in a field, the axe next to her head, as a warning to others.

When Rembrandt heard of the events he went to the field and drew her twice: a young girl, a child almost, come to a miserable end in the big city.

Prolific poisoner Maria Catharina Swanenburg
It’s not exactly a proud boast but a Dutch woman by the name of Maria Catharina Swanenburg is mentioned in the Guinness Book of Records as the most prolific poison murderer of all time. It is thought that between 1880 and 1883 ‘Goeie Mie’ (Good Mie) – she earned the name for her readiness to help people out – poisoned over 100 people, mostly neighbours and members of her family. Arsenic was Swanenburg’s poison of choice. 27 people died and 45 became seriously ill. Swanenburg, a washerwoman who lived in one of the poorest areas in Leiden, was after the insurance money and even took out insurances behind the victims’ backs.

In 1883 three people of the same family died raising suspicions. The trail quickly led to Swanenburg and her rapidly diminishing store of friends and family. A number of bodies were exhumed and found to contain arsenic. Swanenburg confessed and was sentenced to life. Her motives never did become clear. Although she pocketed the insurance money she never spent it. It is thought she enjoyed the sense of power it gave her to decide who lived or died. Swanenburg died in prison in 1915.

The Baarn murder
Youth, privilege and class justice were some of the powerful ingredients that made up the Baarn murder case. In 1961 the bones of a 14 year-old boy were found in a pit covered in lime next to a villa in Baarn, home to the well-heeled Henny family. They belonged to Theo Mastwijk, a petty criminal who had earlier implicated Hennie Werkhoven (15) a student at the Baarns Lyceum in the theft of a motor bike.

Hennie was also good friends with millionaire’s sons Ewout (16) and Boudewijn (17) and it is likely that all four boys had something to do with a spate of burglaries in the neighbourhood. Theo, for some unknown reason, stayed, unseen, at the huge 42-room villa of the Henny’s where either Hennie or Boudewijn delivered the fatal blow to Theo’s head. The reason for the murder is a mystery. Perhaps Theo blackmailed the boys. Some have said the sheer arrogance of these rich boys made them think they could get away with murder.

During the court case the brothers were allowed several outings – among which a sailing holiday – amid cries of class justice. Boudewijn and Hennie were condemned to 9 years, while Ewout got 6. The brothers were allowed to continue their studies in prison. On being released they took over their father’s life insurance business at the villa and are presently in 178th place in the Quote 500 list with a fortune of €147m.

Wednesday is minced meat day
Woensdag, gehaktdag (Wednesday, minced meat day) is a Dutch saying that takes on very sinister meaning in the case of Richard Klinkhamer. After a checkered career – Klinkhamer went into the Foreign Legion at 19, worked as a butcher and then turned novelist – and several failed marriages Klinkhamer married Hannie Gofiron and moved to the hamlet of Hongerige Wolf (Hungry Wolf) in Groningen. Klinkhamer played the stockmarket but lost everything in the crash of 1987, including his wife’s money.

The marriage deteriorated and in 1991 Klinkhamer hit his wife over the head with a crowbar during an argument and killed her. He then buried her underneath a shed under a layer of concrete. Klinkhamer was a suspect in her disappearance but it wasn’t until 2000, when the new owner of the house in Hongerige Wolf discovered Gofiron’s remains, that Klinkhamer was caught. He confessed immediately, claiming his wife went for him first with the crowbar. He was given six years for manslaughter.

In 2007 his book ‘Woensdag, gehaktdag’ was published. In it Klinkhamer describes various ways in which the killing of his wife may have occurred.

Miscarriage of justice: the Putten murder case
The Putten murder case is one of the most notorious miscarriages of justice ever recorded in the Netherlands. In 1994 two men were sentenced to ten years – of which they had already served seven when they were released – for the murder of Christel Ambrosius. In January 1994 stewardess Christel Ambrosius cycled over to her grandmother’s house on the edge of the small town of Putten on the Veluwe. Her grandmother turned out to be visiting a sick friend and Christel waited for her in the house. On her return the grandmother found Christel dead. She had been raped and her throat cut. On her leg traces of semen and two hairs were found.

Witnesses claimed to have seen an old green Mercedes driving around in woods near the house at the time of the murder and owners Wilco Viets and Herman Du Bois – who were known to take a green Mercedes for a spin at weekends – were quickly arrested. Neither the hair nor the semen belonged to either man but police were so convinced – ex-copper Jan Blaauw called it ‘tunnel vision’ – they had the killers they came up with a theory: Christel must have had sex earlier with a boyfriend and the subsequent rape ‘dragged’ out the semen.

The boyfriend never materialised but the judge in the case found the story compelling enough to sentence the men to ten years. Crime reporter Peter R. de Vries and Jan Blaauw remained unconvinced and pushed for a DNA test of the hairs which turned out to be a match with the semen. It was extremely unlikely the hairs would have remained on Christel’s leg until after her murder, the duo maintained and the case was reviewed. On their release the men were given almost a million euros each in compensation. In 2008 Ronald P., who was 19 years old and living in Putten at the time, was apprehended for the murder.

Kerwin Duinmeijer: A racist murder in Amsterdam
The murder of Kerwin Duinmeijer in 1982 marked turning point in Dutch society. Two months after the murder anti-racism bureau RADAR was founded in Rotterdam, the first of its kind. According to director Cyriel Triesscheijn ‘the image as the Netherlands as a tolerant society was no longer valid’. 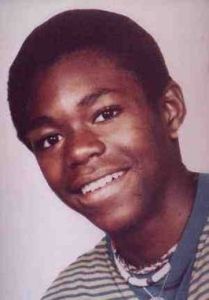 Kerwin Duinmeijer, an Antillean boy adopted by white parents, was fifteen years old when he was fatally stabbed by 16 year-old skinhead Nico Bodemeijer in the Damstraat in Amsterdam. In spite of obviously racist remarks made by the perpetrator in the run up to the attack the judge in the case didn’t think racism was at the bottom of the crime. Bodemeijer suffered from ‘a developmental disorder’ and couldn’t be held completely responsible for his deeds.

Bodemeijer, who sported a ‘100% white’ tattoo, went to a psychiatric centre for minors until he was 21. Later he became active in the emerging anti-immigration party Centrum Democraten. Bodemeijer was in and out of prison and died in 2012. Kerwin Duinmeijer is remembered each year in a march from Dam square to the Vondelpark on August 20, the day of the killing.

The assassination of Pim Fortuyn
The murder of LPF leader Pim Fortuyn in the run up to the national elections in 2002 caused shock and outrage in the Netherlands. The press spoke of a ‘before’ and ‘after’: the Netherlands would never be the same again. On May 6 controversial and outspoken politician Fortuyn – who some said was sure to become the country’s next prime minister – was leaving the media park in Hilversum when he was shot at point blank range by militant animal rights activist Volkert van der Graaf.

Van der Graaf was portrayed as an obsessive man with a black-and-white sense of right and wrong who enraged farmers by his meticulously prepared cases against any environmental wrong-doing. When asked what drove him to shoot Fortuyn he said he considered the politician to be ‘a growing menace to the most vulnerable people in society, such as asylum seekers, Muslims and people on benefits.’ Van der Graaf was sentenced to 18 years. He was released in 2014 after serving two-thirds of his sentence.

Cold case solved by DNA – the murder of Marianne Vaatstra
Another crime that kept the nation in suspense was the murder of 16 year-old Marianne Vaatstra from Friesland who was found raped and murdered in a field in 1999. It would take 13 years to solve the case. Meanwhile rumours stoked up public feeling against a local asylum seekers’ centre. The first round of DNA testing included two inhabitants of the centre who were exonerated but no match was found. The case continued to generate publicity – not in the least because of the tireless efforts of Vaatstra’s father – but it wasn’t until a second, large-scale DNA probe that the killer finally came into view.

Farmer Jasper S. and his family lived just a very few kilometres from the murder site. S. stated that he bumped into the girl, who was on her way home, and threatened her with a knife. He could not remember why he committed the crime except that he felt ‘stressed’. According to his lawyer S. took part in the DNA probe because he ‘felt the net was closing in and he wanted to get caught’. S. was described as a ‘hard-working family man’ – he maintained he’d kept silent in order to protect his family – and the community had a hard time believing he actually committed the crime. S. was sentenced to 18 years.

The girl from Nulde
The case that became known as the ‘girl from Nulde’ was solved when police, unable to identify the scattered remains of a small child, some of which were found at the beach at Nulde in 2001, decided to order a reconstruction of the head. 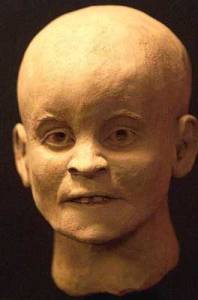 Teachers and family members subsequently recognised 4 year-old Rowena Rikkers. The little girl died after having been horrendously beaten by her stepfather who also punished the child by locking her up in a dog cage for two months prior to her death. The child’s mother and stepfather fled to Spain but were tracked down and sentenced to 12 and eight years respectively.

The murder of Theo van Gogh
On November 2004, controversial film maker and columnist Theo van Gogh was murdered in Amsterdam by Mohammed Bouyeri, a Dutchman of Moroccan descent. Van Gogh was cycling to work when Bouyeri shot him eight times and then cut his throat. He then took a knife and pinned a note on Van Gogh‘s chest threatening former politician Ayaan Hirsi Ali. 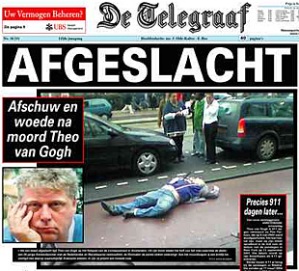 According to Bouyeri both Van Gogh and Hirsi Ali, who together made ‘Submission’, a film critical of the treatment of Muslim women, were enemies of Islam. A poll conducted two and a half years after the murder showed that 52% of respondents thought that freedom of expression in the Netherlands had been compromised. Bouyeri was sentenced to life in prison.