Being built on a swamp, where wood was the building material of the day, not much remains of the prehistoric Netherlands. Even the Romans avoided much of the country because of the risk of wet feet. But here is a list of 10 old Dutch things

The oldest signs of human life in the swampy lowlands were left by a humanoid called Homo heidelbergensis who decided the perfect place to roam was what is now the middle bit of the Netherlands. There they left flints and tools that may be 300,000 years old but could possibly be double that number. The tools, sharpened stones, were probably used to scrape hides.

The oldest burial place found so far is in Hardinxveld-Giessendam, where the complete skeleton of a woman was discovered. Trijntje, so dubbed because she was found during building work on the Betuwe train (trein) line, is thought to be between 7,000 and 7,500 years old. She was 158 cm tall, and between 40 and 60 at the time of her death. How she died could not be ascertained.

The oldest roads which can be identified were part of the Roman Limes, the border defences which marked the edges of the Roman empire which roughly ran from Katwijk and then followed the Rhine. The roads were not thought to have been paved, but packed with gravel and clay.

The oldest town in the Netherlands as afar as official town privileges are concerned is Stavoren (1058) in Friesland but Nijmegen is probably the oldest town of some importance today. In 1980 a roman victory column dating from 17 AD was stumbled upon, celebrating the emperor Tiberius’ successful campaigns in the Lower Rhine. Nijmegen was known as Ulpia Noviomagus Batavorum  in Roman times.

The oldest Dutch house still standing is in Deventer. It has a bit of wall dating from 900. The rest of the house was built in 1130, including its city gate (which is the oldest city gate in the Netherlands.)

Hebban olla vogala nestas hagunnan hinase hic anda thu, wat unbidan nu? It means, or was thought to mean ‘All the birds are making their nest except you and I, What are we waiting for?’ and it has long been considered the oldest example of the Dutch language. The text was found on a manuscript copied in Winchester Abbey and is thought to be a little doodle to try out a new pen by a monk in his native West Flemish. 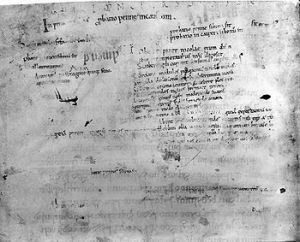 In 2012 Belgian professor Luc de Grauwe made a very convincing case for the sentence to be in Old English. According to the professor this translates into the much less romantic and frankly incomprehensible: ‘All the birds have now built their nests except you and I, now what do you expect?’ The official oldest Dutch bit is Maltho thi afrio lito, or ‘I tell you I release you’ which dates from 510 and was the standard phrase to free a serf.

Reclaiming land has been a Dutch pursuit since the 14th century but the first polder of any significance is the Beemster (1607 – 1612). It even made the World Heritage list. Brilliant engineer Jan Adriaanszoon Leeghwater (literally empty (of) water) used 47 windmills to drain an area of almost 73 m2 km. The Beemster was turned into extremely fertile agricultural land and generated much wealth for the canny investors of the time. 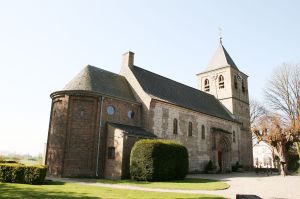 The oldest church in the Netherlands still functioning as a church is the Oude Kerk in Oosterbeek (Gelderland) which is pre-Romanesque and dates from the 10th century. In 1944 the church was the backdrop to heavy fighting between the Germans and the Allies during Operation Market Garden. It remains a place of pilgrimage for many veterans today.

Leiden University is the oldest university in the Netherlands. It was founded on February 7, 1575. Apparently William of Orange offered the city a choice: an exemption of tax for ten years or a university. It would have been interesting to know how close the vote actually was. Apart from such 19th century Dutch luminaries as statesman Johan Thorbecke, father of the Dutch constitution, an impressive 13 Nobel prize winners worked at the university. Albert Einstein, Marie Curie and Niels Bohr also visited. 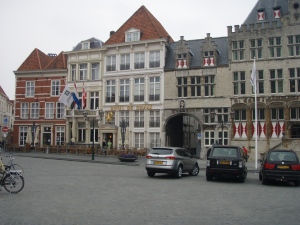 The oldest Dutch company still in business is Hotel De Draak in Bergen op Zoom. It was listed as an inn as early as 1406 and is a hotel still. It has had its share of mishaps, most recently a devastating fire in 2013, but it has since reopened. One of the most remarkable people to (dis)grace the guest list must be the Spanish Duke of Alba who stayed the night in 1567, a year before the start of the 80 Years War’, or the Dutch revolt against Spain.